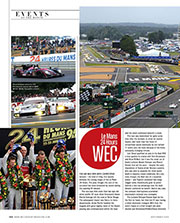 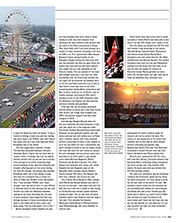 The air was ripe with competitive tension – the kind of thing that usually enlivens the closing stages of the Le Mans 24 Hours. This year, though, the zest of the occasion had been tempered by events during the opening 10 minutes.

The race was little more than two laps old when prolific GT racer Allan Simonsen’s Aston Martin Vantage left the road at Tertre Rouge. The subsequent impact was fierce, its force unsurvivable. Aston Martin handled the tragedy with great dignity: news of the Dane’s passing was communicated within the hour and the event continued beneath a cloud.

The race was neutralised for quite some time after the incident, to allow for barrier repairs, and more than five hours of competition would eventually be lost behind 11 safety cars, not least because of the fickle, constantly changing climate.

Loïc Duval qualified on pole in the Audi R18 e-tron quattro he shared with Tom Kristensen and Allan McNish, but it was the sister car of André Lotterer, Benoît Tréluyer and Marcel Fässler that set the pace – despite the early impudence of Toyota driver Nicolas Lapierre, who was able to separate the three works Audis in slippery, mixed conditions. On a dry road, though, the Audi was on a separate planet – and Toyota’s extended fuel range (bigger tanks theoretically gave its petrol hybrids a two-lap advantage over the Audi diesels) conferred no benefit. And in any case, the constant interruptions scrambled everybody’s notional race strategies.

The Lotterer/Tréluyer/Fässler Audi led for the first six hours, but then lost 11 laps having a failed alternator changed. With that, the crew’s hopes of a third straight win were dashed and Kristensen/McNish/Duval inherited a lead that would be theirs for keeps. “It was a matter of driving a clean race and not making any extra stops,” said McNish, and their rhythm was upset only by a late, slow puncture when Kristensen was at the wheel.

The final stages were a wrench, though.