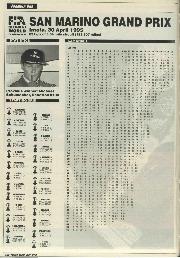 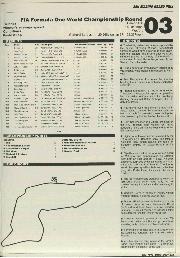 The heavily revised Imola track is praised by the drivers, although Michael Schumacher admits he would have preferred to race elsewhere this season. The drivers observe a one minute’s silence in memory of the death of colleagues Roland Ratzenberger and Ayrton Senna 12 months earlier.

Ferrari debuts and evolutionary version of its V121 engine, while Renault introduces its RS7A V10.

Jean Alesi sparks tifosi hopes of a victory by heading the timesheets in both acclimatisation sessions.

Andrea Montermini is not fit to drive on Thursday in the wake of an appendix operation. He does take to the cockpit for qualifying, dashing Emmanuel Collar’s hopes of a GP debut for Pacific.

Having improved his Benetton’s handling in Jerez testing, Michael Schumacher gets the best of a battle for pole which sees the top five cars covered by just five tenths of a second.

Both Schumacher and Elf are criticised by the FIA President Max Mosley for having adopted a ‘childisih’ stance over the Brazilian GP controversies.

Ligier owner Flavio Briatore is cleared by the FIA of funning a ‘Benetton copy’, but Minardi instigates legal action against the team for allegedly swiping its Mugen-Honda engine deal.