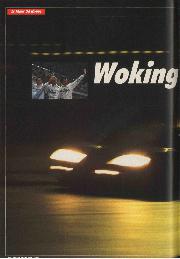 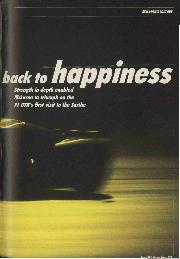 Thirteen years ago Porsche's new 956 Group C cars swept to a 1-2-3 result at Le Mans on their debut outing. No manufacturer has come anywhere near crowning that achievement... until now. McLaren Cars of Woking won the 1995 edition of Le Mans outright, claimed the top four positions in the Grand Touring category and, for good measure, placed four cars in the top five positions.

Third, another lap down, was the Harrods McLaren driven by Andy Wallace/Derek Bell/Justin Bell, and they were followed at a distance by two more McLarens, those of Ray Bellm/Maurizio Sala/Mark Blundell and Fabien Giroix/Olivier Grouillard/Jean-Denis Delétraz.

It was a race of dreams fulfilled, dashed hopes, and of nightmares too. Relentless, drizzling rain made the track treacherous for 16 hours, throughout the night, which caused a number of accidents: Andretti spun and damaged the Courage C34 Porsche, sinking Wollek's hopes of winning the event at his 25th attempt; Hans Stuck also spun his chances away in the Kremer K8 Porsche, a car that suffered a transformation in the race that moved Thierry Boutsen to remark: "It feels as though the wing has been fitted upside down."

Some drivers have a knack of winning, most do not. Yannick Dalmas has the knack, taking the podium on all four appearances at Le Mans. He was first with Peugeot in 1992 (with Derek Warwick and Mark Blundell, and became the last World Sportscar Champion), second with Peugeot in 1993, first with Dauer Porsche in 1994, and first again with McLaren in 1995. Pedigrees don't get much better than that! The cars he drove, the McLaren F1 GTR, hardly had a pedigree at all. The GTR race version first turned a wheel in February, and has never raced on a wet track. Least of all did it have any form at Le Mans, a circuit that will inevitably search out any weakness in a design.