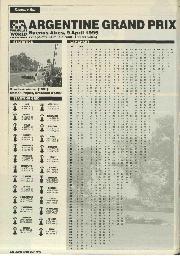 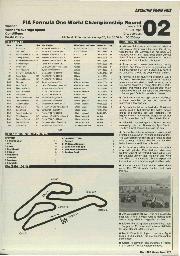 Michael Schumacher survives an ordeal at sea several days before the race. Out diving with friends, the German and his party are stranded when their boat drifts away without them. Schumacher has to swim for an hour to re-establish contact; nobody is injured.

Torrential rain causes interruptions during practise, and there are even suggestions that the first Argentine GP for 14 years may have to be cancelled, should the poor weather persist.

Fastest in both qualifying session, David Coulthard takes his first pole position. The Scot makes a superb start to lead the race, but a first-corner accident involved Alesi, Panis, Salo, Badoer and Martini and a subsequent brush between Herbert and Barrichello causes the race to be stopped. Only Badoer fails to restart.

Coulthard starts well again, but an electrical problem costs him the lead and forces his retirement a few laps later.

Schumacher takes the lead when Coulthard strikes trouble, but Damon Hill swiftly moves ahead and controls the race thereafter. His biggest threat in the closing stages comes not from Schumacher, but from Jean Alesi’s Ferrari.