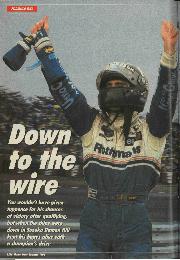 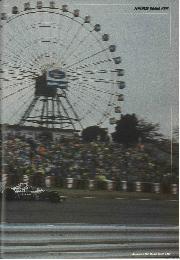 You wouldn't have given tuppence for his chances of victory after qualifying, but when down in Suzuka Damon Hill kept his hopes alive with a champion's drive.

From the moment that Michael Schumacher so insouciantly began to hammer home quick laps in qualifying, you began to form the impression that victory in the Japanese GP — and the World Championship — was all but a formality for the dour German. As he and the Benetton handled the circuit's sweeps and flat-out swerves with almost majestic ease, Williams struggled, its FW16Bs looking cumbersome and intractable. Worse still, as far as his championship aspirations were concerned, Damon Hill was floundering in Nigel Mansell's wake. True, he outqualified his team-mate on the strength of Friday afternoon's lap, but on Saturday the former champion had been in a class of his own as he became the only man to break into the 1m 36s bracket. There is evidence that Hill did a fair amount of soul-searching prior to Saturday's final session, but then the skies opened and washed everything away in anti-climax. Going into the race, the advantage seemed entirely with Schumacher.

Suzuka, however, has a tradition of serving up the unusual and, when raceday dawned wet, there was just the chance of something unpredictable. What none of us could foresee as the grid formed, though, was just how this would become the most exciting race of 1994.