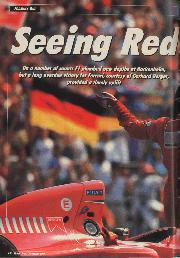 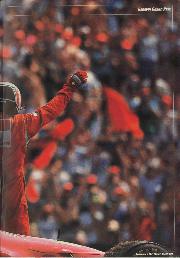 On a number of counts F1 plumbed new depths at Hockenheim, but a long overdue victory for Ferrari, courtesy of Gerhard Berger, provided a timely uplift

An all-Ferrari front row in qualifying, scandalous allegations about the Benetton team, shunts involving 10 cars before the first corner, retirement for Michael Schumacher, a horrible pit lane fire, victory for Gerhard Berger and Ferrari. Oh, and the Ligiers second and third! Even the over-imaginative scriptwriters Emmerdale Farm couldn't have come up with anything more bizarre than this German GP. . .

Perhaps it was the intense humidity that addled some things about this meeting, for Hockenheim was as oppressed by heat as England has been of late. And Benetton was feeling the same way about the FlA by the time the green lights went on at two o'clock on Sunday afternoon. The previous Tuesday Schumacher had been suspended for two races for ignoring the black flag at Silverstone, and Benetton had had its fine upped to $500,000, while there were allegations made that its electronic systems in the San Marino GP had breached the rules. The World Motor Sport Council had ultimately 'cleared' Benetton of infringement, but then the FIA had released the full text of the technical report made to the Council (see sidebar), and though it claimed to have done so 'to avoid speculation'. it was interpreted by the majority, rightly or wrongly, as a thinly disguised smear campaign.