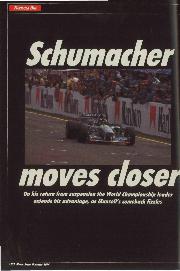 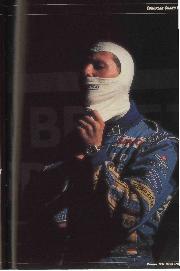 On his return from suspension the World Championship leader extends his advantage, as Mansell's comeback fizzles.

The folly of Jerez as a Grand Prix track was never better illustrated than on the afternoon of Sunday, October 16.

The sherry region's idea of a racetrack provided many of the safety facilities that were so conspicuously lacking when Martin Donnelly had his awful accident in 1990, the last time the F1 circus visited it, but one thing was desperately absent: anywhere to overtake. Like Jarama, it created follow-my-leader chasing, not racing.

For the first 18 laps it seemed that we had the makings of a race, when Damon Hill won the all-important drag to the first corner and obliged Michael Schumacher to dog his wheeltracks. This was an intensely satisfying moment for Hill, who had been attacked verbally by Schumacher prior to the weekend, in a singularly ill-advised and, ultimately, completely ineffectual attempt at out-psyching. It must have seemed like a good idea at the time to whomever put the German up to it, and Michael's thoughts at this precise moment would have been interesting to record.