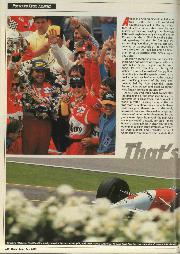 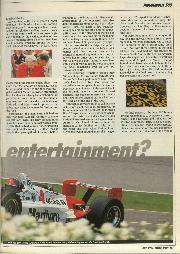 And so the 77th running of the Indianapolis 500, the self-proclaimed 'Greatest Spectacle in Racing', is history. It was a remarkable race for any number of reasons, ranging from Emerson Fittitpaldi single-handedly slaying the Ford/Cosworth hordes to Nigel Mansell's splendid speedway baptism by fire and the astonishing facts that the top six cars were covered by six seconds at the finish, four more were on the lead lap and no fewer than 24 of 33 starters were circulating at day's end.

Emerson's second win came as a shock to those who had written off anyone without a Ford in his (or her) engine bay. In retrospect, it's clear that line of thinking fell victim to a sort of journalists' Happy Hour' mentality. Just like the speeds posted in the final, cool hour each afternoon, the practice and qualifying speeds of the Ford contingent, led by Arie Luyendyk, Mario Andretti, Raul Boesel and Scott Goodyear, were largely irrelevant on race day.

As with any oval track, what counts after the first round of pit stops isn't how a car performs on a clear track, but how well it works in traffic. Passing a competitive car was more of a chore than ever at Indianapolis this year, thanks both to the newly narrowed turns and the smaller wings and 'strakeless' underbodies demanded by this year's rules. Apart from Raul (the man who some say couldn't qualify for an F1 race) Boesel's opening blast in clean air, the only other men to enjoy large stretches of 'clean' air were Mansell and Fittipaldi, both of whom led late in the race after restarts that bunched the field.