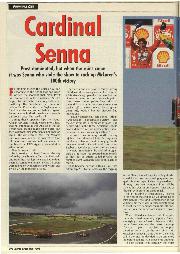 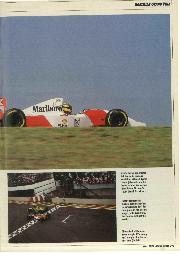 Prost dominated, but when the rains came it was Senna who stole the show to rack up McLaren's 100th victory

For its first 29 laps the Brazilian GP ran according to the script that had been written the moment that Alain Prost and Damon Hill in their Williams FW15Cs began to decimate their opposition in qualifying. The Frenchman had been on pole – his 22nd – with the Englishman a fraction under one second behind. Ayrton Senna was only third, nearly two seconds off Prost's pace. That said it all.

During those opening laps the South African GP victor simply eased into a lead that he extended at will. And when Hill let Senna take second place off the grid, but then overtook him with insouciant ease on lap 11, the die seemed cast. The Williams duo was away, and Senna was left to fend off the advances of Michael Schumacher in the Benetton. 1993 style, it seemed situation normal.

Then it began to rain.

Such weather had been forecast the day before by local hotshoe Christian Fittipaldi, and from the 17th lap the skies had indeed been darkening ominously. By lap 26 spots were falling on windscreens and visors, and by lap 27 the monsoon arrived.

By then Senna was down to fourth, having pitted just at the wrong moment to observe a 10s stop-'n'-go penalty that was but one of several meted out to drivers alleged to have passed under yellow flags. Most of them did so simply because slower cars backed off to allow them to do so, giving them little option but to disobey flag indications.

"I couldn't believe it," said Senna. "I think it was Comas" – himself also a victim – "and the guy lifted off to let me go through. The people who make these decisions should have a different way of implementing them, because I think it was a big mistake."