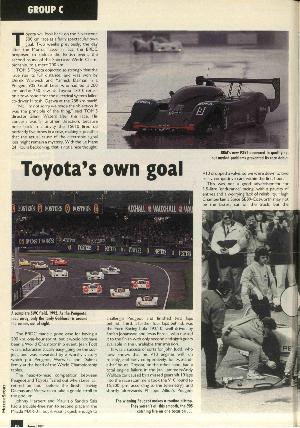 Toyota will look back on the Silverstone 500 km race as a fairly spectacular own goal. Two weeks previously, the day after the Monza fiasco in fact, the BRDC proposed to reduce the British event, the second round of the Sportscar World Championship, to a mere 200 km.

TOM'S Toyota objected so strongly that the race ran its full distance, and was won by Derek Warwick and Yannick Dalmas in a Peugeot 905. Geoff Lees, who had led at 200 km, and at 250, saw his Toyota TS010 return on a tow-rope after the electrical system failed co-driver Hitoshi Ogawa at the 288 km mark!

"No, I'm not sorry we made the objection. It was the principle of the thing," said TOM'S director Glenn Waters after the race. His concern was in another direction, because once back in captivity the TS010 fired up perfectly five times in a row, making it possible that the actual cause of the electronic signal loss might remain a mystery. With the Le Mans 24 Hours beckoning, that is not a nice thought.

The BRDC made a good case for having a 200 km, one-hour sprint, but it would not have been a World Championship event. Jean Todt was uncharacteristically easy-going on the subject, and was rewarded by a worthy victory which put Peugeot. Warwick and Dalmas firmly at the head of the World Championship tables.

The head-to-head competition between Peugeot and Toyota fizzled out when Lees' car retired an hour before the finish, leaving Dalmas and Warwick to take a gentle stroll to the podium.