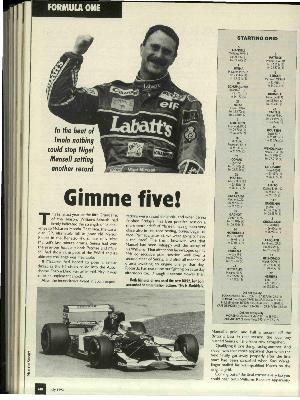 In the heat of Imola nothing could stop Nigel Mansell setting another record.

This time last year, at the fifth Grand Prix of the season, Williams-Renault had firmly indicated the strength of its challenge to McLaren-Honda. That race, the Canadian GP, ultimately fell to poor old Nelson Piquet in the Benetton-Ford, but only after Mansell's last minute drama. Senna had won the previous four, but both Patrese and Mansell had shown the pace of the FW14 and its ultimate challenge was inevitable.

If McLaren had hoped to pose a similar threat as the F1 circus rolled into the Autodromo Enzo e Dino Ferrari in mid-May, it was in for an unpleasant shock.

After the inconclusive event in Spain expec tations were raised for Imola, and when Senna finished Friday's first free practice session a mere tenth adrift of Mansell, having been very close also in pre-race testing, pulses began to race. Perhaps, after all, we were going to have a real race? The truth, however, was that Mansell had been unhappy with the set-up of his Williams. That afternoon he wrapped up his fifth consecutive pole position, well over a second clear of Senna, and after all manner of drama awaiting an engine change that day, Riccardo Patrese came out fighting on Saturday afternoon too. Though a second slower than Mansell's pole, and half a second off the Briton's best in that session, the local boy pushed Senna off the front row altogether.

Qualifying is one thing; racing another. And never was that more apparent than when the field finally got away properly after the first start had been cancelled when Karl Wendlinger stalled his well-qualified March on the original grid.