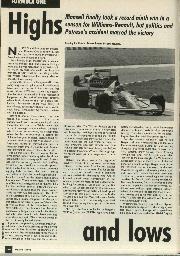 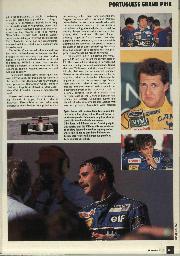 Mansell finally took a record ninth win in a for Williams-Renault, but politics and Patrese's accident marred the victory

No 1992 Grand Prix quite so encapsulated Formula One as it now is, than Portugal. Very much, the weekend in Estoril was one of highs and lows.

Since Monza, Nigel Mansell had, of course, made his lndycar bed. The signs in Portugal were that he was more than happy to lie on it. So much so, that one could not help but wonder, as Alain Prost did recently, just when the World Champion-elect really decided enough F1 was enough.

Around the time of the Hungarian GP, when everything was still up for grabs, Mansell would have been on the rev limiter after the first major failure of Williams' active ride suspension that he experienced on Friday morning. It happened at the end of the back straight, which leads down to the 180 degree lefthander. Fortunately, there was plenty of run-off area, but it clearly shook him, as well it might have. "It was a big, big moment, believe me," he insisted.

Estoril is one of those circuits that time forgot. You know, the sort of time that in England would insist on safety fencing all round to protect the spectators. Triple layer Armco barrier in strategic locations where, the other side of the current two tiers, lies a steep drop. When he first encountered it testing for McLaren last year, Michael Andretti could not believe it. And this is a man well versed in the fairground nature of Milwaukee's mile, or Nazareth's tight oval. It is not the sort of circuit that you want to leave involuntarily, Estoril.