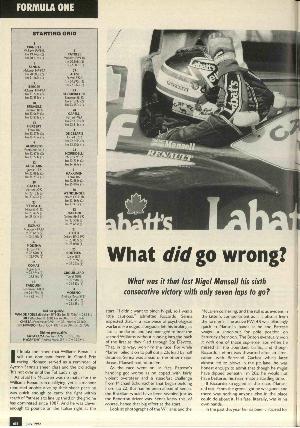 What was it that lost Nigel Mansell his sixth consecutive victory with only seven laps to go?

If Imola confirmed that Williams-Renault is still the dominant force in Grand Prix racing, Monaco served as a reminder of Ayrton Senna's sheer class and the old adage 'It's not over until the Fat Lady sings'.

As usual his McLaren was no match for the Williams-Renaults in qualifying, yet in a manner rendered unobtrusive by their sheer pace he was quick enough to carry the fight within reach of Patrese's to line up third on the grid he has dominated since 1987. And he was clever enough to pounce on the Italian right at the start. "I didn't want to pinch Nigel, so I was a little cautious,” admitted Riccardo. Senna expected that, in a nice piece of psychological warfare. He edged alongside, left his braking as late as he dared, and just managed to beat the second Williams without running into the back of the first as they filed through Ste Devote. That, in its way, won him the race. For while Mansell piled it on to pull out a 22s lead by half distance, Senna was ahead of the other major threat. Mansell had no buffer.

As the race went on, in fact, Patrese's handling got worse as he coped with fairly violent oversteer and a steadfast challenge from Michael Schumacher that began building from lap 22. But had he been ahead of Senna, the Brazilian would have been stymied just as the Benetton driver was. Senna knew this, of course, hence that big effort at the start.

Look at photographs of the Williams and the McLaren cornering, and the roll is as evident in the latter's comportment as it is absent from the former's. The active FW14B was blindingly quick in Mansell's hands as he and Patrese waged a shoot-out for pole position on Saturday afternoon. The Briton eventually won it with one of those supreme laps when he missed all the abundant traffic, and though Riccardo's effort was thwarted after an altercation with Bertrand Gachot which later almost led to blows in the pit lane, he was honest enough to admit that though he might have dipped beneath 1m 20s, he would not have bettered his team-mate's startling time.