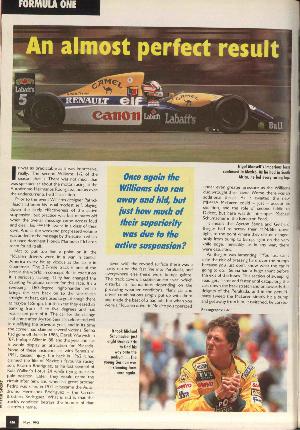 Once again the Williams duo ran away and hid, but just how much of their superiority was due to active suspension?

It was as predictable as it was impressive, really. The second Williams 1-2 of the season, that is. There was not much that was spectacular about the motor racing at the Autodromo Hermanos Rodriguez, but as ever the undercurrents held fascination.

Prior to the event Williams designer Patrick Head had been his usual modest self, playing down the likely effectiveness of the active suspension, but practice was but minutes old when the overall message came across loud and clear: his FW14Bs were in a class of their own. And as the weekend progressed volume was added to the message by the state in which the once dominant Honda Marlboro McLaren team found itself.

Not to put too fine a point on it, the McLaren drivers were in a war in central America every bit as vicious as the strife in Guatemala. The 2.7-mile track is one of the best in the world, in concept. But in execution it is seriously lacking. They had changed the daunting Peraltada corner for this race. It's a sweeping, 180-degree right-hander which brings the cars back on to the start/finish straight. At best, cars used to get through there at maybe 165mph, but this year they eased its banking from 12 to five degrees and had resurfaced part of it. The call for the change had come after Ayrton Senna's celebrated roll in qualifying the previous year, and in its time the corner had claimed several victims. Senna had gone off there in 1986, Derek Warwick in '87, Philippe Alliot in '88, and this year and last it would display an attraction for Minardis. None of these incidents, as with Senna's in 1991, caused injury, but back in 1962 it had claimed the life of Mexico's favourite racing son, Ricardo Rodriguez, as he lost control of Rob Walker's Lotus 24 while trying to claim pole position. Later, they would name the circuit after him, and when his great brother Pedro was killed in 1971 it became the Autodrorno Hermanos Rodriguez the Circuit Brothers Rodriguez. What is sad is that the track's condition betrays the honour of that illustrious name.