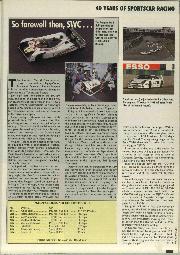 The Sportscar World Championship came to an end at Magny-Cours, France, on October 18 when Peugeot inflicted another comprehensive defeat on Japanese rivals Toyota and Mazda.

Just eight cars took part in the 500 km race, the sixth and final round in the SWC series, and two of these were in the FIA Cup category where Chamberlain Engineering's Spice SE89C maintained its unbeaten record for the season, as did Ferdinand de Lesseps in the drivers' category.

Euro Racing withdrew its two Judd-powered Lola T92/10s before the first qualifying session, citing a total lack of sponsorship. "It would be financial suicide to compete this weekend," said Mick Franklin, director and manager of the Dutch-based team, who hopes to resurrect Euro Racing's fortunes in the IMSA series next year.

Peugeot Talbot Sport entered three cars, all equipped with a sophisticated traction control device which merely emphasised their year-long superiority. One was the mean looking Evolution 2, with which world champions Derek Warwick and Yannick Dalmas persevered throughout qualifying but finally discarded.

Equipped with semi-automatic transmission for its new transverse gearbox, a new chassis, revised suspension and a daringly cut body style, the Evo 2 may well be a fine test-bed for any future Formula 1 programme that Peugeot could be involved in. At Magny-Cours, though, it was unstable and overheated its rear tyres, and its drivers switched to the older 905 without regret.