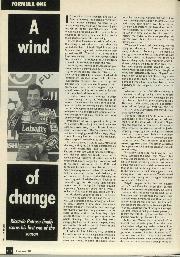 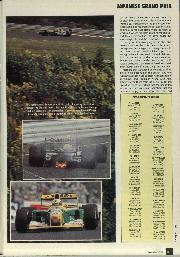 Riccardo Patrese finally scores his first win of the season

If the wind hadn't changed direction on Sunday morning, the outcome might have been rather different. Gerhard Berger would most likely have won his second Japanese GP on the trot and McLaren and Honda would have produced just the result the latter sought on its home ground and in its penultimate appearance for the time being.

It was thus fortuitous to Williams-Renault, that change of wind direction, but indirectly it settled the fates of both Nigel Mansell and Senna in what might well also have been their penultimate GPs. Chez McLaren, it was said to have been enough to have over-revved Ayrton Senna's engine, thus obliging the Woking team to install a fresh RA122E before the race.

Williams, too, wanted to change its top gear ratios. When his crew pulled down the undertray to do the job on Riccardo Patrese's car, they were greeted by a smear of oil which immediately sounded alarm bells. Further investigation revealed that the sump had cracked, and what was simply going to be a gearbox job turned into a full engine change. It would prove the key to the veteran Italian's first triumph of a disheartening season.

Less than three laps into the race, in which he was already trailing the Williams duo by seconds, Senna knew he had a serious problem, and pulled off coming up the hill behind the pits. A bung had fallen out of the pneumatic valvegear on his replacement engine, and he was through for the day. Honda's hopes now lay solely with Berger.