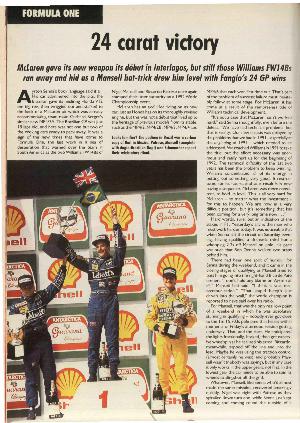 McLaren gave its new weapon its debut in Interlagos, but still those Williams FW14Bs ran away and hid as a Mansell hat-trick drew him level with Fangio's 24 GP wins

Ayrton Senna's body language said it all. His car stammered into the pits, the Brazilian gave its misfiring Honda V12 the big rev, then wriggled out and stalked to the back of a McLaren pit which was already accommodating team-mate Gerhard Berger's similar new MP4/7A. The Brazilian GP was just 18 laps old, and here was not one but two of the Woking cars ready to pack away. It was a sign of the new times that have come to Formula One, the last wave in a sea of desperation that washed over the team in South America as the two Williams FW14Bs of Nigel Mansell and Riccardo Patrese once again stamped their utter authority on a 1992 World Championship event.

McLaren has an awful lot riding on its new car, just as Honda has on its thoroughly revised engine, but this was not a debut that lived up to the heritage of previous models from its stable, such as the MP4/2, MP4/2B, MP4/3, MP4/4 and MP4/6 that each won first time out. That's part of the problem of success; failure must inevitably follow at some stage. For McLaren, it has come as a result of the remorseless tide of Williams technical development.

"It's not a case that McLaren hasn't worked hard," said Senna thoughtfully, even before the defeat. "We have had technical problems, but that is reality. Our new chassis was delayed by the problems that we had in 1991 especially at the beginning of 1991 which needed to be addressed. We reached Williams in 1991 to take the title, but the effort necessary was enormous and really hurt us for the beginning of 1992. The technical difficulty of the last two years has been the problem to keep winning. Williams concentrated all of its energy in putting out something very good. It restructured for its future, and as a result it is now having a sequence. McLaren was more consistent, to hold its level. This is all very hard for McLaren no matter what the investment for this to happen. We are now in a very difficult position, but it's something that has been corning for a very long time now..."