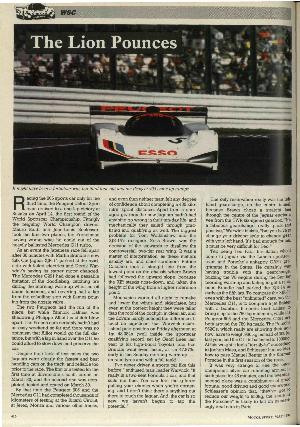 Racing the 905 sports car only for the third time, the Peugeot-Talbot Sport team cruised to a one-lap victory at Suzuka on April 14, the first round of the World Sportscar Championship. Fittingly the reigning World Champion drivers, Mauro Baldi and Jean-Louis Schlesser, took the first two places, the Frenchman having wrung what he could out of the heavily ballasted Mercedes C11 turbo.

As an event the Japanese race fell apart after 50 minutes with Martin Brundle's new Silk Cut Jaguar XJR-14 parked at the roadside with failed electrics and Derek Warwick's having its starter motor changed. The Mercedes C291 had done a passable imitation of the doodlebug, catching fire during the morning warm-up when an oil union loosened, and covering half a lap from the refuelling stop with flames pouring from the nozzle valve.

The two Peugeots had the run of the place, but while Yannick Dalmas was shadowing Philippe Alliot his clutch blew apart. The French cars certainly hadn't had an easy weekend so far and there was no optimism that Alliot would go the full distance, but with a lap in hand over the C11 he could afford to slow down and preserve the car.

Despite their lack of test miles the two Jaguars were clearly the fastest and best handling cars on the track, and reliable too prior to the race. The first one tested for the first time at Silverstone's south circuit on March 20, and the second one was completed, tested and crated on March 30.

By that time the Peugeot 905 and the Mercedes C11 had completed thousands of kilometres of testing at the Ricard Circuit, at Jerez, Monza and various other tracks, and even then neither team felt any degree of confidence about completing a 430 kilometre 'sprint' distance. Apart from a damaged gearbox the new Jaguars hadn't had anything go wrong in their ten-day life, and mechanically they sailed through practising and qualifying as well. The biggest problem for Tom Walkinshaw and the XJR-14's designer, Ross Brawn, was the decision of the stewards to disallow the controversial, two-tier rear wing. It was a matter of interpretation, as these matters usually are, and chief scrutineer Patrice Catalano took a straight line from the lowest point on the chassis where Brawn had followed the upward slope, because the XJR stands nose-down, and taken the height of the wing from a higher reference point.