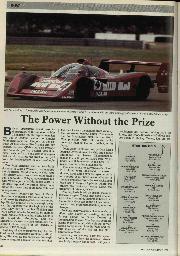 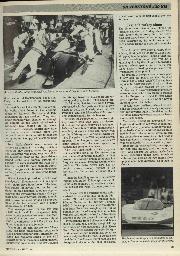 The power without the prize

British spectators could see for themselves, at Silverstone on May 19, that the Silk Cut Jaguar team has set out in callous fashion to humble Mercedes-Benz and Peugeot on the circuits. At Silverstone, like Suzuka and like Monza, the new XJR-14s were on average four seconds per lap quicker than their main rivals, and that's the sort of timespan that should separate the front of the grid from the back markers in a close-fought race.

Teo Fabi, handing over at two-thirds distance to Derek Warwick, commanded the Sportscar World Championship race with absurd ease. From the start he pulled out 74 seconds in 20 laps, leaving none but Karl Wendlinger in the Mercedes C291 on the same lap, and the purple Jaguar completed the major part of the race with next to no pressure.

The same couldn't be said of Martin Brundle, who missed third gear at the start and broke the throttle cable on the second lap. His XJR dropped six laps straight away and the recovery was the highlight of the race. Only four of Brundle's 73 flying laps were slower than the fastest lap by another make, Michael Schumacher's 1m 33.798s in the 12-cylinder Mercedes, and the Englishman's solo run also netted him the outright circuit record at 1m 29.372s, a speed of 130.80 mph.

Sighting of the chequered flag for the third time in successive weekends, didn't bring Warwick all the happiness he might have wished for because 40 minutes after the race he was disqualifed from winning, then reinstated without points. This means that he languishes ninth in the World Championship, with 20 points, while new-man Fabi is the top challenger for Jaguar.