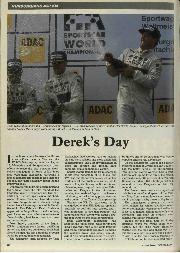 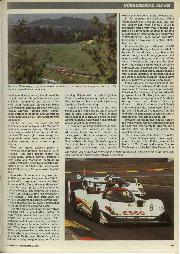 In the three months between the Silverstone 430 km race in May and the ADAC's Nürburgring event on August 17, Mercedes and Peugeot made great efforts to close the gap between themselves and Jaguar. In terms of lap times they were quite successful, narrowing a four second per lap chasm to less than one second, but their reliability factor hadn't improved at all.

The two purple Silk Cut Jaguars finished the German race, the fifth round of the Sportscar World Championship, five seconds apart but six laps clear of the third placed Kremer Porsche. Two Mercedes and two Peugeots were already being loaded back into transporters while Derek Warwick, Teo Fabi and David Brabham appeared on the podium... and the race, part of a series once called the endurance championship, had lasted less than two-and-a-half hours.

Ross Brawn, designer of the Jaguar XJR-14, predicted even before qualifying started that if the two continental rivals had closed the gap, the last part of the process would be the hardest to accomplish.

The Kidlington team directed by Tom Walkinshaw had worked hard on making the cars more reliable and more efficient in all departments, and a lot of work had been done on springs and torsion bars, dampers, brake cooling and venturi.

Starter motors tend to be troublesome in sports cars, especially at Le Mans, and TWR has one starter which does all the test work and all the practice sessions, just to see how long its life may be. It was this sort of development, beyond the scope of Mercedes and Peugeot in the midsummer months, that enabled Jaguar to achieve a 1-2 victory, and which may prove decisive in the pursuit of the Teams' Championship.

Visually the Silk Cut cars were hardly changed, other than NACA ducts replacing 'snorkels' to cool the rear brakes, and it was interesting to see that Peugeot had adopted snorkels, along with Jaguar's two-tier rear wing, on the development path.