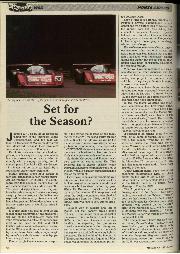 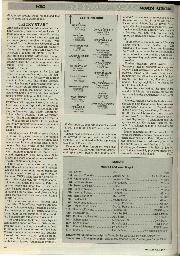 Set for the Season?

Jaguar's XJR-14 is by far the fastest car taking part in the Sportscar World Championship, and the Silk Cut team's 1-2 success at Monza on May 5 was well deserved because their problems were minor compared with others.

Derek Warwick made two unscheduled pit stops on his way to victory, one to have his windscreen cleaned and another to comply with a stop-go penalty, and in second place Teo Fabi's XJR was delayed 12 minutes (three pace-car laps) by a recalcitrant starter motor solenoid.

Martin Brundle drove both Jaguars in turn and established a new Monza sports-car lap record at 1m 29.182s (145 mph), more than four seconds quicker than the old mark set last year by a Mercedes C11. The sheer disappointment that lingered from the debut outing at Suzuka was swept away by the success, and the Italian race exposed fundamental problems that will haunt Peugeot and Mercedes at least until the next sprint race, at the Nürburgring in August.

It seems clear now that so long as one Jaguar keeps going without any problems it will win all the 430-kilometre races this year, even more easily than Mercedes won most of the races in 1989 and 1990. Qualifying times and best race laps confirm that the XJRs have three or four seconds a lap in hand over their rivals, a huge margin by today's standards -- worth one lap per hour on a typical circuit.