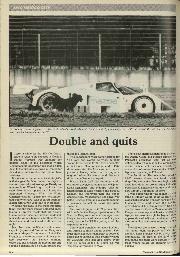 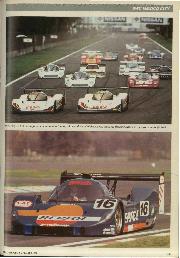 It took a while for the Silk Cut Jaguar team to react to the success in Mexico. Derek Warwick was heading for second place in the Sportscar World Championship encounter and made a late dash to the pits for slick tyres, all the better on a drying track to catch race leader Keke Rosberg.

It was a racer's choice, not a strategist's, and the gamble failed when the Jaguar's starter motor refused to engage. Nearly ten minutes later Warwick got back into the race, down in sixth place and bitterly disappointed. Success? Why, the World Championship for Teams, the most important trophy to have, was secured again for Jaguar after a two-year loan to Mercedes!

Winning the race is the most important thing, and the team was so dejected about losing a top-two result that the Teams Championship seemed almost incidental, until celebrations began in the Hotel Fiesta Americana and continued well into the night.

Jean Todt went to Mexico with a message for Jaguar and Mercedes: Peugeot's victory at Magny-Cours was no fluke! The French cars were quickest in all four practice sessions, the Sunday morning warm-up, and finished the race in first and second positions, so no doubt remains that this is the team to beat.

The implications were rather serious for Teo Fabi and Derek Warwick, as they waited three weeks for the final encounter at Autopolis. Championship leader Fabi didn't even start the Mexican race, the oil pressure having failed in his Jaguar's engine before the event, and Warwick didn't capitalise as he hoped.

Mauro Baldi (still the reigning world champion driver, sharing the title with Jean-Louis Schlesser) and Philippe Alliot finished second to Keke Rosberg and Yannick Dalmas, and improved their title hopes considerably. What seemed like a two-way battle between Fabi and Warwick became a four-way contest as Baldi and Alliot closed in.