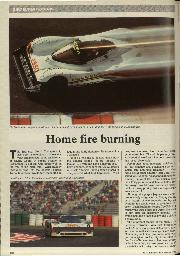 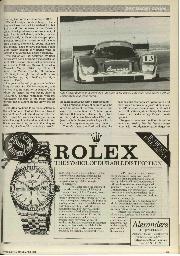 The Sportscar World Championship has been a one-sided contest this year, and the result of the sixth round at Magny-Cours, in central France on September 15 put Silk Cut Jaguar well on the trail of the main title. What nobody predicted was that the gallant Peugeot Talbot Sport team would turn the tables on Jaguar and fairly dominate the race with a 1-2 result!

"If you'd told me at Suzuka that before the season ended I'd be lapping a Jaguar I wouldn't have believed you." Keke Rosberg, winner of the 430 Kilometre race with Yannick Dalmas, found it hard to comprehend what had happened. "The progress the team has made has been quite incredible. The whole package was very good all weekend, Peugeot deserved this result, absolutely."

Faster than Jaguar in testing, quickest in all four practice and qualifying sessions, fastest lap, and total reliability — what more could team director Jean Todt have asked for? Second, 43 seconds behind the winning Peugeot 905, were Suzuka winners Philippe Alliot and Mauro Baldi, and the margin would have been a lot closer but for a messy pit stop that was beyond the team's control.

Although the purple Jaguars were comprehensively outgunned at Magny-Cours, by a margin of two seconds per lap on average, the result wasn't a complete disaster. David Brabham helped Teo Fabi to a worthwhile third place and Derek Warwick to fifth after an extremely eventful run, which included a flash fuel fire and a visit to a gravel bed.

The important feature of the race, from Jaguar's viewpoint, was that Mercedes couldn't earn any points at Magny-Cours, and are not realistic challengers any more. Continuing technical problems, now with porous engine blocks, blight the effort of the Swiss-German team that was almost invincible in the past two years, and in all probability will delay the decision about entering the Formula One arena in 1993.

Warwick's eight points at Magny Cours may not have been all he wished for, but they could be decisive in the Driver's Championship where six scores count, of eight. Fabi is well ahead, with 74 points to Warwick's 58, but if the Italian keeps up his excellent reliability record he will have to drop a score, perhaps 12 points, after the final round. Their relative positions could quite easily change if Warwick wins in Mexico or at Autopolis, a real possibility.