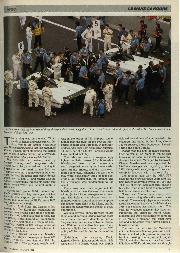 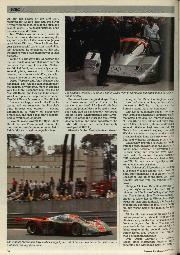 The writing was on the wall. Thousands of British enthusiasts made the ritual visit to the famous Restaurant des Hunaudieres, to find that this bastion of French cuisine, right alongside the fastest Part of the Le Mans circuit, had a new sign over the door: Shanghai les 24-Heures.

The Orientals had arrived, and by Sunday evening they'd conquered. Mercedes were the pace-makers, running in formation at the head of the field on Saturday evening, but only one of the three cars reached the finish after costly delays put it down to fifth. . . . and Mazda was the winner, a seemingly impossible result that made sense when you thought about it rationally.

Jaguars were placed 2-3-4, but to everyone's amazement they were just not fast enough, handicapped (as were the Mercedes and Porsches) by FISA's heavy 1000 kg scrutineering weight.

Early in April FISA did Mazda a big favour, but the European manufacturers were so busy eyeing each other's preparations that they didn't take proper note. The controlling body slipped an amendment through allowing Mazda to retain the scrutineering weight of 830 kilogrammes all season, removing the need to ballast up to 880 kg for Le Mans.

It was a crucial concession. Mazda's quad-rotor engine develops at least 630 horsepower, but less than the 700 bhp claimed for it. The power-to-weight ratio was in the order of 760 bhp per tonne, higher than the ratio for the 1000 kg Mercedes, Jaguars and Porsches. In fact Mercedes and Jaguar both claimed an output of 730 bhp, and the 3.2 litre Porsches would have reached 720 bhp.

The Mazdas were correspondingly lighter on their brakes (like Mercedes, Mazdaspeed used carbon brakes this year), suspensions and tyres; it was easier work for the drivers, and the cars were more economical. When the true test came, they were consistently three or four seconds a lap quicker than the Jaguars, and this advantage was fundamental to the result.