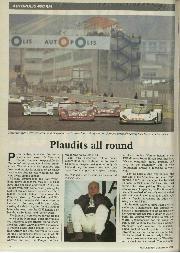 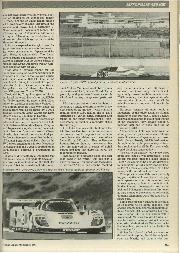 Peter Sauber, nice man that he is, shed a few tears. Dr Hermann Hiereth, the man responsible for Mercedes racing engines, looked dumbstruck. The virus that had plagued and destroyed the flat-12 engines on an hourly basis since August just cleared up and went away, simple as that!

Michael Schumacher and Karl Wendlinger drove the race that they and the C291 have long deserved and won the Autopolis 430 km event with some ease, pushing the Silk Cut Jaguars back to second and third places overall. Behind them was the Peugeot driven by Mauro Baldi and Philippe Alliot, championship contenders at the start of the race, and in their wake, making the day complete for the Sauber Mercedes team, was the C291 handled by Jean-Louis Schlesser and Jochen Mass.

The Jaguar drivers waited in vain for the demise of the Mercedes, but it didn't make any difference to the drivers' World Championship. Derek Warwick drove a solo race to second place, half a minute behind the Silver Arrow, but Teo Fabi would only lose the title if he finished lower than third. All the Italian needed to do was to stay behind Warwick and keep the Peugeot at bay, which was no trouble at all.

Fabi duly succeeded fellow Italian Mauro Baldi and Schlesser as the World Champion, despite having raced only six times during the season and won only once. He is a good champion, though, worthy of the title. "Very un-Italian" is how TWR director Roger Silman describes him, "always extremely quick, precise, and easy on the machinery. Teo is very determined, always a pleasure to work with."

They go back a long way. Silman first met Fabi at the Argentine Formula 3 Temporada in 1978, and managed the Toleman F1 team in 1982 when Fabi and Warwick formed the driver pairing. History had a strange way of repeating itself at Autopolis, when Silman had to be totally even-handed with both men in the Jaguar team, although with a 10-point advantage the odds certainly favoured Fabi.

At the end, Warwick gave Fabi a warm smile and a handshake. The Englishman had felt a lot of pressure in the weeks since his younger brother Paul's death at Oulton Park. He wanted very much to win the World Championship for his sake, for Paul's, and to show the Formula 1 people the talent they'd rejected. He resented being docked his 20 points by FISA at Silverstone, and he wanted to win the title that had eluded him so narrowly in 1986.