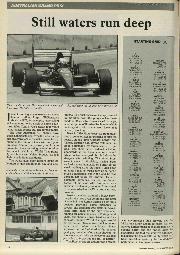 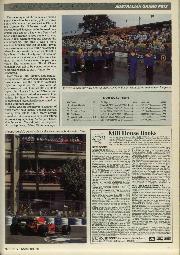 In motor racing, some lessons are never learned. After Roger Williamson's death in 1973, for example, marshalling still continued to be slack in some countries. After Tom Pryce's death four years later, foolish people still ran across tracks.

The 1989 Australian GP should have been sufficient to chill even the least caring into an awareness of the risks presented by racing in the rain on a track with very poor drainage. After all, only sheer good fortune prevented that one being remembered as the race in which two World Champions, Ayrton Senna and Nelson Piquet, had lost their lives in freak accidents.

You would think such lessons could be learned in this enlightened day and age, but the 1991 Australian event simply served to underline how little progress has been made in 24 months. It was a carbon copy, another game of Russian Roulette in which motorsport could count itself lucky nobody was hurt.

Back in 1989 Alain Prost had been pilloried in some circles for refusing to take the restart. At the time Gerhard Berger and Thierry Boutsen had agreed with him, but been persuaded by circumstance to get back into their cars. Gerhard admitted afterwards he had been a moral coward, while Boutsen changed his mind about the dangers after winning. This time, Prost wasn't even in Adelaide, having been sacked unceremoniously by Ferrari in the week leading up to the race. It had been rumoured that he would turn up to host a press conference, but in the end he was advised not to by his lawyers. Thus, in complete acrimony, ended the Ferrari career of the man who has won more Grands Prix than anyone else. It remained to be seen whether his F1 career was over, however.

Prost's dismissal painted a bleak backdrop for the race even before the first drop of rain fell, but Ayrton Senna's 60th pole position provided some moments to savour. The Brazilian was again in devastating form, back on the high wire after running for points finishes in Portugal and Spain, and though Berger tried as hard as he might, the new World Champion would not be denied. Senna was quickest overnight and, when conditions finally improved in the final third of the second qualifying session, after a rain shower, he was there again with an awesome lap that just failed to break into the lm 13s barrier.