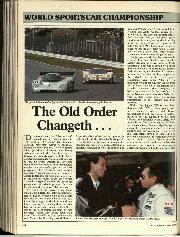 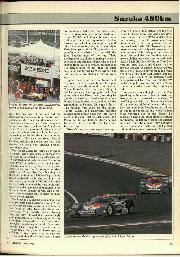 "Do you remember the 'Silver Arrows' finished their debut race at Reims in 1954 with a 1-2 victory?." Dr Hermann Hierath, Mercedes' Group C technical project manager, put that to Peter Sauber when Jean-Louis Schlesser and Kenny Acheson crossed the finishing line at Suzuka six seconds apart, and the Swiss constructor hurried to the back of the garage to dry his eyes! Despite the awesome reputation of Mercedes in motor racing, and despite the massive effort put into the 1989 programme, Peter Sauber's team remains essentially nice and sporting, in victory or defeat. Judging by the form shown in Japan, at the opening round of the 1989 World Sports-Prototype Championship, there are plenty more victories in prospect this year for the second generation Silver Arrows.

All credit to the Swiss-German team, which looked decidedly shaky in qualifying, and to Kenny Acheson who drove a solo race lasting nearly three hours, and still found the strength to shock team and race leader Schlesser by moving ahead for four laps in the last hour. Manager Max Welti was forced to re-shuffle his team on race morning, Jochen Mass, being down with Asian flu and suffering from double vision and Mauro Baldi taking pain-killers to forget the effects of his broken ankle each time he hit the Mercedes' brake pedal.

For the Silk Cut Jaguar team though the Japanese race was not so much a defeat as a disaster, routed not only by the Saubers but by a Joest Porsche and a Nissan as well. John Nielsen and Andy Wallace coaxed their XJR-9 V12 to fifth place on the limit of their fuel allocation but Jan Lammers threw caution to the winds, setting the fastest lap of the race on lap 75 and parking on lap 80 with a dry tank.. "We'll have an investigation when we get the cars back home ... right now we don't know what went wrong,” commented team manager Roger Silman.