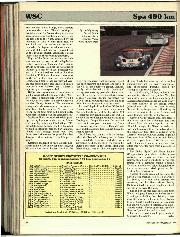 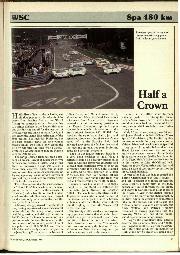 Half a litre of fuel, or the lack of it, was all that prevented Jean-Louis Schlesser from leaving Spa as the World Champion sportscar driver. Perhaps due to a minor mishap in the Sauber Mercedes pit, the Parisian set off for the last part of the race with the tank not quite filled, and this led to the team's first retirement of the 1989 season. Bad luck for Schlesser, but the best possible news for race winner Mauro Baldi, who could now claim the title by winning the final World SportsPrototype Championship race in Mexico City on October 29.

The Swils-German team has been dominant all season, except at Dijon when tyre performance became a factor, and at Spa even the improving Nissan was less of a threat than expected. Baldi was on pole position with Jan Lammers alongside in his Jaguar, appearing just as they did last year at Spa, and they would have an equally hectic tussle for the first corner.

The difference was that the start was from the "Grand Prix" line heading for the hairpin at La Source, and (in the absence of television) only a handful of people understood how the little Dutchman again lunged for the lead, only to be outfumbled on the exit by the little Italian. Schlesser, though, started from the third row, having experienced a rare mechanical failure during the vital, drying second qualifying session, and although he was in Baldi's dust at La Source he was never in a position to win the race. Retirement, in the last moments of the contest, robbed him of any points at all. Bob Wollek and Frank Jelinski moved smartly up to second place in the Joest Racing Porsche, with the Nissan of Julian Bailey and Mark Blundell third, after a minor delay. Reinhold Joest's Porsche team from Absteinach in Germany secured a certain runner-up position in the Team's Championship, and again showed how much life remains in the oft-dismissed Porsche 962. Wollek finished on the same lap as Baldi, just, and remarked afterwards that there wasn't any speed left in the Porsche. Baldi had powered away from the field at the start of the race and no-one, not even Schlesser, could find the right response.