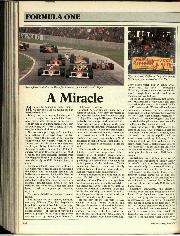 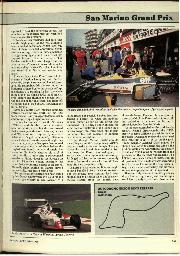 Miracles do happen in motor racing. We saw one at Imola during the San Marino Grand Prix

It may not have been quite the sort of miracle the tifosi had in mind for Ferrari once they'd seen the times the McLaren-Hondas turned in during testing and again in qualifying, but it was a solid, 99-carat, bona fide miracle all the same.

Not so many years ago, we'd now have been talking of Gerhard Berger in late terms, rueing the passing of yet another charger who never knew when to quit. Instead, we can still smile at the hardiness and irrepressibility of a racer who can strike the concrete wall at Tamburello at 170 mph, survive sitting in the ensuing fire for 23.51 seconds, and then discharge himself from the Maggiore Hospital in Bologna only the next day to fly to Willi Dungl's Austrian clinic.

Berger can thank Ferrari for building a car which was tough enough to withstand the impact, and the smooth speed of the Italian rescue services, for his life. How he survived the shunt and the fire, and came out of both with nothing more serious that a cracked shoulder-blade, broken rib and sternum, and some nasty chest and hand burns, is still a complete, yet welcome, mystery.

As I said, miracles do happen in motor racing. The miracle the tifosi craved, however, was very different. They had desperately hoped for a repeat of that delicious surprise success in Rio, when Nigel Mansell had deified himself — at least until they find a reason to plunge the knife into him before twisting it — by taking John Barnard's F1/89 Ferrari to victory.