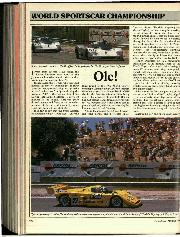 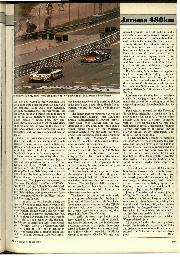 Fresh from success at Le Mans, the Sauber Mercedes team went to the Jarama track outside Madrid with another winning performance on June 25.

Jochen Mass, the German who surprised himself the most by winning the 24-Hour race after many years of trying, was again the team’s “anchor man” in Spain, driving the winning C9/89 in the first and last shifts, leaving Jean-Louis Schlesser to drive 70 minutes in the middle. Heat was every driver’s enemy and Mass, at 43 the oldest member of the Mercedes team by some years, was declared the fittest of all.

It is fair to say that the Swiss-German team dominated this 480km race — only the third round of the 1989 World Sports-Prototype Championship, halfway through the calendar year — as Mauro Baldi’s C9/89 also led the first fifty minutes before being delayed by a brake hydraulic leak. But the Silk Cut Jaguar team showed a revival with the V12-powered XJR-9 and earned second place, a lap down, with the car driven by Jan Lammers and Patrick Tambay.

A Brun Porsche was third (Oscar Larrauri and Jesus Pareja) and a 31/2-litre Spice- Cosworth fourth (Thorkild Thyrring and Wayne Taylor), so there was quite a variety in the order. So twisty and slow is the Madrid circuit, in fact, that the Spice team rather fancied its chances for a surprise victory, but found that fast practice times are one thing, a fast race another: the 7-litre Jaguars and turbocharged Mercedes and Porsches can out-accelerate anything between the corners, overtaking in situations where the Spice drivers find themselves short of “go” and become baulked.