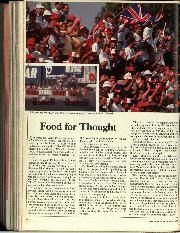 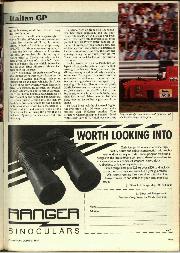 Six years ago, Alain Prost was the most vilified man in Italy. He was hated so much by the tifosi he had to be protected by bodyguards during the Italian GP. He even received death threats. When his Renault broke he faced a long walk back to the pits, and was stoned by Ferrari's faithful supporters.

Times change in F1, but nothing is more mercurial than the tifosi's affections. On lap 40 of the 1989 Italian GP they faced a dilemma. Nigel Mansell 'Lion Nigel' as the supporting banners called him was clearly in some sort of trouble and wasn't going to win for Ferrari. And Prost was closing in on Gerhard Berger's second-placed F1/89. They'd cheered the Frenchman on the formation lap, but what to do now? A lap later, the deed was done as Prost scythed inside the Ferrari going into the first chicane, right under the noses of the tifosi. By then the reaction had been sanctioned. Here, after all, was the true 1990 Ferrari driver disposing of the traitor who was turning his back on the Prancing Horse to drive for the enemy next year. Never mind that the Austrian had been the hero of the hour the previous year when he smashed McLaren's hopes of winning every 1988 GP. That was then and this was now.

There was more to come.

You didn't have to be able to see up to the Parabolica on lap 45 to know something horrible had befallen Ayrton Senna. The scream of the tifosi and the flurry of their banners was graphic enough indication. As far as they were concerned the right McLaren was now leading.

The Brazilian had, quite simply, annihilated the opposition in qualifying on Saturday. The day before, when the track itself was faster, he'd struggled to get within three tenths of the Ferraris, yet by Saturday McLaren Honda had found a massive 1.3s at a time when the Ferrari drivers had lost two tenths apiece. Ayrton might have bodged his first run with a missed gearshift, but on the second he slammed round in 1m 23.720s to leave the rest gasping.