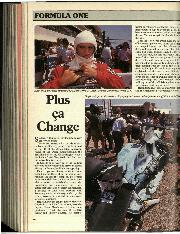 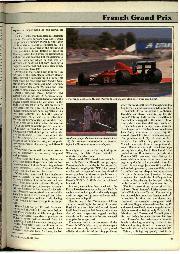 The rot had started with that electronics problem in Phoenix, but even as he retired on lap 44 of the depopulated American round of the World Championship, the Brazilian had no way of knowing just what a bad hand of cards Fate would deal him over the succeeding two races.

In Canada he so nearly got to the flag first after one of the outstanding drives in recent history. In France, he didn’t manage a lap.

He even got two chances to do so. From second slot on the grid for the second year running, he got the jump on pole-sitting team-mate Alain Prost, which no doubt gave him a sense of satisfaction since the Frenchman had announced only days before that the reason he is leaving McLaren is because he can’t stand working with Senna any more, nor the way in which, as he sees it, Ayrton has curdled the once comfortable atmosphere.

His lead lasted as long as it took Mauricio Gugelmin to lock his front wheels, have the Leyton House March veer left, and then spectacularly vault the cars of Gerhard Berger and Thierry Boutsen. His compatriot’s involuntary aerobatics brought an immediate red flag, and once the debris had been scooped up (in remarkable quick time) the two McLarens again headed the field off the line.

This time, however, Prost made the most of his second pole in two races and Senna’s car jumped forward and then slowed suddenly as he shifted into second. The differential had failed, and he rolled off to the left.