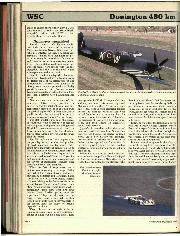 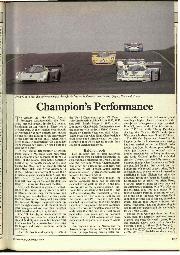 To capture the 1989 World Sports-Prototype Championship, the Mercedes team had to pass a Spitfire 120 times at Donington on September 3. There was a peculiar irony in the situation, even though the warplane was only a plastic replica, and no-one felt like alluding to the anniversary of the outbreak of war until Jochen Mass broke the ice, in celebration: "It's a good job we're wearing soft shoes, or you'd hear the clicking of heels!"

On that sunny late-summer afternoon Peter Sauber's Mercedes team performed like a champion and recorded its third 1-2 result of the season. Jean-Louis Schlesser notched up his fourth victory of the year helped by Mass, and 52 seconds behind came Mauro Baldi and Kenny Acheson. As at the Nurburgring a fortnight before their principal opposition came from Nissan, the R89C driven by Julian Bailey and Mark Blundell finishing on the lead lap despite a front tyre failure two laps from the flag. Above all, Donington presented a challenge to the microchip engineers who have to calculate the best 'map' for economy. Fuel consumption was absolutely critical, even more so than at the 'Ring, and once again the east-side Stuttgart engineers came up with the right answers, while the west-siders were wrong-footed and saw their Porsches finish fourth and fifth, a lap behind.

The Silk Cut Jaguar team enjoyed an encouraging first hour but slipped in the second, both Spices succumbed to electrical problems, but Aston Martin faced the Huns for longest and finished sixth and seventh, with honour. One title that is undisputably British is the World Championship for C2 Teams. Spice Engineering claimed it in 1985, 1987 and 1988, Ecurie Ecosse in 1986, and at Donington Chamberlain Engineering took the honours with the Spice SE89C Cosworth driven by Fermin Velez and Nick Adams. Third place was what Hugh Chamberlain's team needed and third is what it got, after a restrained race which left no margin for a couple of unscheduled stops.