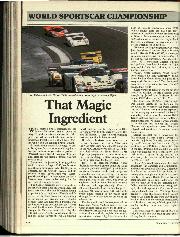 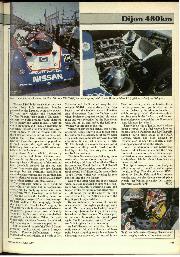 What seemed like a formality for the Sauber Mercedes team at Dijon on May 21, and therefore a contest for third place, turned into a splendid success for an underdog Porsche, a Reinhold Joest 962C driven by Bob Wollek and Frank Jelinski. It might seem rather far-fetched to describe a Joest Porsche as an underdog, but it had been almost two years since a product of Weissach won a World Championship race and, after all, the original design was first seen in 1982.

By contrast the Jaguar XJR design, which made its debut in August 1985, has for some months now been regarded at Kidlington as obsolete, for all "sprint" events, and its second World Sports-Prototype Championship outing of the season, like the first at Suzuka, was almost embarrassing for the car's lack of competitiveness.

The Sauber Mercedes were in dire difficulties with their tyres on a warm day, that much was clear, the rear Michelins losing grip after a dozen laps or so. That shouldn't detract in the least from the outstanding performances of Wollek and Jelinski, because their Goodyear-tyred Porsche was the best car on the day, and beat the "Silver Arrows" by 38 seconds. Even on an off-day though, the Mercedes were able to lap the Silk Cut Jaguars (neither of which finished), and the Tom's Toyota 88C which finished fourth, and pull out three laps on the RLR Porsche driven to fifth place by Derek Bell and Tiff Needell ... that is how the winning performance should be measured.

British enthusiasts who went to the German Supercup meeting at Silverstone the week before saw Wollek fairly dominate in the 962C. An ex-works chassis (011) built as a lightweight for Hans Stuck's 1988 Supercup programme but now running at the statutory 900kg, its Dijon victory was its third in three races for Joest's team.