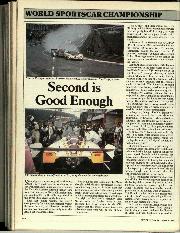 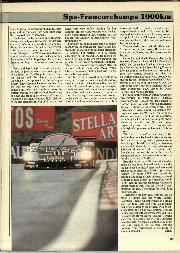 Second place is never as good as winning, but it gave good cause for celebration at Spa-Francorchamps in September, providing the Tom Walkinshaw-directed Jaguar team its second successive World Championship, and enabling Martin Brundle to go ahead in the driver's title-chase for the first time.

Last year Jaguar wrested the teams' championship from the safekeeping of Walter Brun and Porsche, and this season the British marque has defended successfully from the AEG Sauber Mercedes team.

The going has got tough since Le Mans, though, and the Saubers have looked stronger each time they come out. In recent races they have shown a superior fuel-economy on wet tracks, and Michelin has produced a rain-tyre which equals anything from Dunlop's depot. The sight of McLaren's designer Steve Nichols with the Sauber team at Spa, checking Leo Ress' design for the C10, suggests that the Swiss-German team's involvement next year will be one of total commitment.

Just 60 miles, and three weeks apart, the Nurburg and Spa-Francorchamps races were held in equally beautiful settings, but were equally spoiled by dark grey clouds which meandered among the pines, drizzling constantly.

A feature of the German race (Motor Sport, October 1988) had been the ability of the Sauber C9 to run for 110 minutes, (admittedly behind the pace car for 36 minutes), enabling Jean-Louis Schlesser and Jochen Mass to get away with one stop in the first heat, rather than the two stops made by the Jaguars.