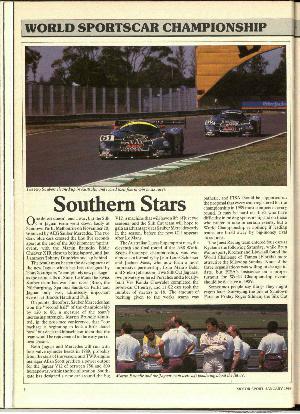 One defeat doesn't end a war, but the Silk Cut Jaguar team went down badly at Sandown Park, Melbourne on November 20, trounced by AEG Sauber Mercedes. The two dark blue cars crossed the line five seconds apart at the end of the 360 kilometre 'sprint' event, with the Martin Brundle/Eddie Cheever XJR close to being lapped, and Jan Lammers/Johnny Dumfries one lap behind.

The result must hasten the development of the new Jaguar which has been designed by Tony Southgate, "a completely new package" as the team calls it. Since Le Mans the Swiss Sauber team has won four races (Brno, the Nurburgring, Spa and Sandown Park) and Jaguar only two, admittedly important events, at Brands Hatch and Fuji.

On points, therefore, Sauber Mercedes has won the "second half" of the championship by 120 to 80, a measure of the team's increasing strength. Martin Brundle admitted, in the post-race conference, that "our package is beginning to look a little dated now" but declared himself confident that the team would be rejuvenated in the early part of next season. Both Jaguar and Mercedes will run with four-valve cylinder heads in 1989, probably from the start of the season, and TWR engine manager Allan Scott predicts a power output for the Jaguar V12 of between 750 and 800 horsepower, within the fuel allocation. Southgate has designed a new car around the big V12, a machine that will have a life of just two seasons, and the Silk Cut team will hope to gain an advantage over Sauber Mercedes early in the season, before the new C11 appears after Le Mans.