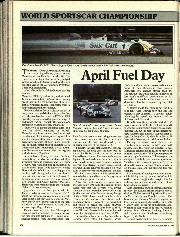 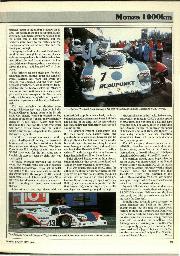 The Monza 1000km race on April 10 had all the classic ingredients, Jaguar versus Mercedes versus Porsche, and the Silk Cut team ended the day with a beautifully-judged victory which puts Jaguar ahead for the first time this year in the World Sports-Prototype Team’s Championship.

Martin Brundle and Eddie Cheever beat the Sauber-Mercedes C9/88 by a clear lap, and trimmed 12 minutes from last year’s race time, having paced their XJR-9 for the first half of the race as their rivals raced ahead, then reeled them in and commanded the second half.

Races which last five or six hours are not to everyone’s taste, and the Porsche parades that were the standard fare between 1976 and 1985 probably did not do anything for the image of endurance racing, though the company’s reputation was undoubtedly enhanced.

The arrival of Jaguar as a major force, and now the added ingredient of Sauber-Mercedes as a front runner, has introduced the element of inter-marque racing which a world championship series needs –each event now becomes infinitely more interesting, so much better than speculating so to whether the Joest, Fitzpatrick, Lloyd, Kremer or Brun customer teams might get to grips with the factory Porsches.

Monza has a history of close finishes, especially in the days of full-blooded slip-steaming without chicanes, and this year’s Group C race was a gripping encounter from start to finish. Jean-Louis Schlesser, Jochen Mass and Mauro Baldi set a storming pace in the first half (though with hands on hearts they said they were on their fuel allowance), duelling with the Porsches of Klaus Ludwig/Massimo Sigala who were certainly using far too much of their 510-litre allocation.