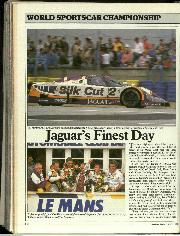 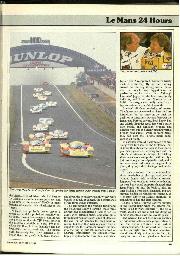 The one nightmare shared by Jaguar's board members was the possibility of defeat at Le Mans. Last year the three entries were prepared beautifully, but lasted only 16 hours effectively, and even with five improved versions this time no-one could confidently predict success.

If any Silk Cut Jaguar XJR-9LM was going to win, it was going to have to beat the Porsche 962C of Derek Bell, Hans Stuck and Klaus Ludwig, the Stuttgart firm's standard bearers, and both Stuck and John Watson, Jaguar's philosopher, predicted a particularly hard contest which would go the whole distance. They were so right!

A superb victory was achieved by Jan Lammers, the Dutchman who took the brunt of duties, by Johnny Dumfries, who easily overcame early-season disappointments, and by Andy Wallace, Tom Walkinshaw's young protege who had never driven around the circuit until the first qualifying session, and had to screw up the courage to take the infamous Mulsanne kink "flat".