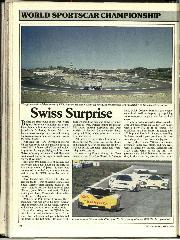 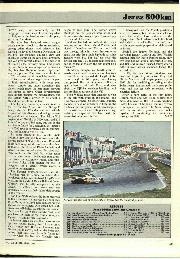 Before the first round of the 1988 World Sports-Prototype Championship began, Peter Sauber's international driver-team of Jean-Louis Schlesser, Mauro Baldi and Jochen Mass made private bets on how long the transmission would last on their Sauber Mercedes C9/88.

Although the AEG Olympia-sponsored V8 car was easily on pole position ahead of three Silk Cut Jaguars, the T-car had broken its gearbox during qualifying (as it had after 600 km of testing in January) and Mass was not too confident of having a car to take over for the third hour!

But after 800 kilometres of racing, and nearly five-and-a-half hours on the tortuous Andalusian circuit of Jerez, the dark blue car was still trouble-free, a worthy winner, and it was the TWR team that was in disarray.

Two Jaguars had retired with identical gearbox faults — that of Martin Brundle and Eddie Cheever after leading much of the time — and it was the third entry of John Nielsen, John Watson and Andy Wallace which gave chase, 25 seconds behind when the chequered flag came out.

Wallace, the 1986 British Formula Three champion who was given his first "works" drive in preparation for Le Mans, survived an incident that was crucial to the result. Soon after taking over the XJR-9 in the third how he was confronted by a C2 car which had half-spun and partially blocked the track on the 120 mph, fifth-gear right hander behind the pits, one of the few quick corners at Jerez. Wallace took to the grass at full speed, missed everything and went straight to the pits for a damage check, losing a full lap while grass was removed from the intakes.

All three drivers put their hearts into the chase but the Mercedes was too far ahead, and although Watson reduced the gap by 50 seconds in the last hour, Baldi had everything under control.

It was a significant victory for Peter Sauber's team (based at Hinwil, in Switzerland) which Daimler-Benz has now openly committed itself to helping by supplying factory-prepared engines and four technicians.

The twin-turbo Mercedes V8s are rated at over 700 horsepower on 0.9-bar race boost, with a hefty 590 lb ft of torque. For qualifying, at 1.2-bar boost, the engine gave 820 bhp and 740 lb ft of torque, enabling Schlesser to take pole position a full two seconds quicker than Brundle's Jaguar.