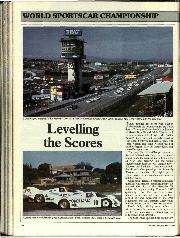 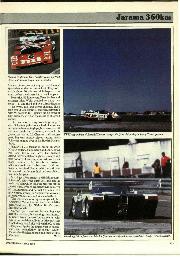 Jaguar levelled the score with Sauber-Mercedes in the second round of the World Sports-Prototype Championship at Jarama, as Martin Brundle and Eddie Cheever took victory in their XJR-9. After the 360km “sprint” they were 20 seconds ahead of Jean-Louis Schlesser and Mauro Baldi, with John Watson and John Nielsen third in another Jaguar after an unscheduled stop caused by a puncture.

The navy blue AEG-Olympia-sponsored SauberC9/88 is clearly going to provide tough opposition to the reigning World Champions all year, and narrowly led the team’s championship after the two Spanish races. Schlesser and Baldi had clear advantage in the driver’s championship, but ironically Watson and Nielsen, the highest-placed Jaguar drivers, are not regular members of the Silk Cut team.

As he had at Jarama, Schlesser dominated the qualifying sessions, making full use of the reputed 820 bhp of the Mercedes V8 twin-turbo engine, beating Cheever’s 1987 qualifying record. The Jaguars were fractionally slower than last year, having been robbed of some downforce by the 1988 regulations, but Jan Lammers, Cheever and Nielsen claimed the next three grid positions.

Derek Bell, suffering from influenza, withdrew from the event on Saturday evening, leaving James Weaver without a partner in Richard Lloyd’s Porsche.