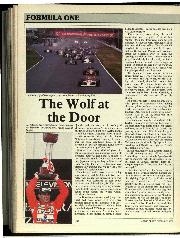 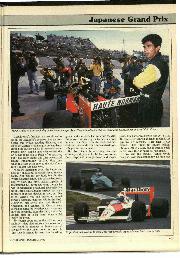 The Wolf at the Door

In the end, the slope on Suzuka's grid worked against Alain Prost, not just once, but twice. It allowed not only Ayrton Senna to roll his stalled McLaren forward sufficiently to restart twice, but also Satoru Nakajima to do likewise. Senna, of course, was the more significant threat to the Frenchman, but the Japanese Lotus driver was also to play a significant role . . .

Suzuka is a funny kind of place, its confines including an amusement park with overhead monorail and about a million of the concession stands from which the fanatical Japanese racegoers buy endless sets of team overalls. Turn up to a European race dressed as Nakajima and you're "out", but in Japan it's decidedly chic.

Here is a nation that takes its motor racing very seriously, and the debacle in last year's race, when Honda was disgraced in its own backyard, was sufficient to cost public relations man Sakurai his job. This time, then, there weren't going to be any mistakes from Tadashi Kume's troops, especially as Senna could clinch the World Championship if he won.

The Brazilian dominated qualifying (after Prost had been fastest in Friday's free practice session in the morning), but Prost was right in his wheeltracks as the two Steve Nichols-designed MP4/4s yet again proved in a class of their own. Yet at the start, incredibly, Senna fluffed it, partly because he made a mistake, partly because his clutch was ultra-sensitive.