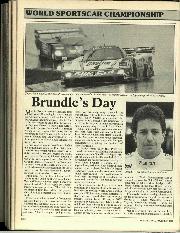 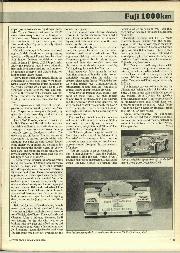 Martin Brundle took a sabbatical from Formula One racing in order to win the World Sports-Prototype Championship for Drivers, and the ambition was realised at Fuji on October 9 when he and Eddie Cheever won the Japanese 1000km in their Jaguar XJR-9.

Brundle's season began with a rousing victory in the Daytona 24-Hours, and he continued to win five World Championship events (of ten to date) and wrest the title from the eager clutches of Jean-Louis Schlesser for Sauber Mercedes.

Their contest was neck-and-neck before the penultimate round at Fuji. With four victories to his credit Brundle needed to win or finish second to become champion, while, with three to his credit, Schlesser needed to win with Brundle placed lower than fourth. Given the impressive reliability of both cars, the odds were in the Englishman's favour despite the recent excellent form of the Swiss cars, and as the race developed Sauber's prospects went from bad to worse.

Fifth place was the best Schlesser could muster in the C9/88 he shared with Jochen Mass and Kenny Acheson, delayed once by a minor electrical fault and again by a turbocharger wastegate problem. The dark-blue car finished four laps behind the Jaguar, which had had a perfect run from start to finish.

Mauro Baldi led for most of the first hour in the second Sauber. But it was just as well for Schlesser that he didn't go into Baldi's car, because 70 minutes from the end a brake-disc shattered as the Italian braked at the end of the one-mile, 200mph straight, ripping a tyre.