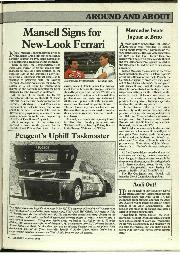 Always highly competitive, the Sauber-Mercedes team recorded its second World Sports-Prototype Championship victory of the season at Brno, in Czechoslovakia, on July 10. The TWR Jaguar team was narrowly but decisively beaten, and although the two Saubers and two Jaguars finished on the same lap it turned out not to be a classic encounter.

Jochen Mass was the mainstay of the Swiss team throughout the event, a 360km “sprint” on the big 5.4km Moravian track. Possibly the German had a point to prove after being eased out of Jean-Louis Schlesser’s car and paired with Jim Weaver, and throughout qualifying he concentrated on finding the best suspension settings for the difficult, multi-cornered track. Schlesser was more interested, as usual, in starting from pole position, leaving Mauro Baldi as a spectator much of the time during practice.

The two Saubers filled the front row as comfortably as the works Porsches did in previous years, on other tracks, and from the start Baldi and Mass pulled out a substantial margin over Jan Lammers and Martin Brundle, with Bob Wollek finding new life in Reinhold Joest’s Porsche 962C.