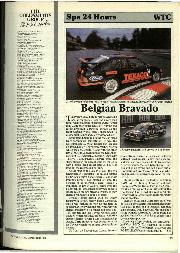 This year's Spa 24-Hour race proved to be one of the wettest seen for a very long time, run in a mixture of drizzle and torrential rain. More than 60 teams set off, but the end result produced a surprise winner as the front-running works teams succumbed to mechanical failure and slowly dropped out.

After pounding round in the wake of some truly formidable competition, it was the CiBiEmme BMW M3 of Belgian trio Eric van de Poele/Didier Theys/Jean-Michel Martin which took the spoils. Along with the other BMW M3s, they had hounded the Eggenberger Ford RS Cosworth of Claus Niedzwiedz/Thierry Boutsen/Klaus Ludwig from the start, but when the Eggenberger car pulled in with a blown head-gasket after 20 hours of leading, the race was all but run.

At the start of the Spa 24 Hours, the two Eggenberger Cosworths (the second piloted by Britain's Steve Soper/Pierre Dieudonne/Philippe Streif) had blasted off into the distance at an incredible pace, leaving a multitude of BMW M3s to scrap over the places behind. It seemed nobody was going to able to catch the two black Cosworths as they charged round like a couple of trains.

Britain's hopes rested with the Andy Rouse/Win Percy/Thierry Tassin Cosworth, which was making its way up the field in spectacular style when the car, with Percy in charge, suddenly lost a wheel and spun out. Tiff Needell and his Toyota Corolla came unstuck with mechanical problems, while the current British Touring Car Championship leader, Chris Hodgetts, was forced to retire his Toyota when it too became involved in an incident.