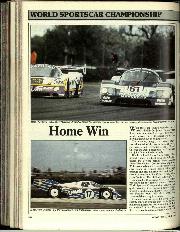 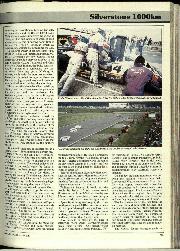 With three consecutive victories to its credit, the Silk Cut Jaguar team went to Silverstone determined to repeat last year's maiden success, but a little afraid too that its luck might run out on home ground.

The outcome, though, was a comprehensive whitewash of the works Porsche team, and Jaguar's first 1-2 result in Group C. Eddie Cheever and Raul Boesel beat Jan Lammers and John Watson by six seconds.

Derek Bell and Hans Stuck were a lap behind (though credited with the full distance, the Porsche pairing never having looked like winners. Jochen Mass and Bob Wollek counted themselves lucky to be fourth after racing at reduced speed with fuel pressure and pick-up problems, and the C1 class was completed by Walter Brun, with Jesus Pareia and Uwe Schafer, in fifth place.

Compared with previous years, the entry was down for the BRDC's annual 1000 km World Sportscar Championship race, but the quality was high. Overshadowing the series at present is the desperate plight of the private run Porsche teams, all adrift with the commercial fuel they have to use.

Reinhold Joest withdrew his entry on the slightly spurious grounds that the 97-octane minimum guaranteed was unsuitable for his car, and the Brun and Kremer teams have lost their edge too. In retarding the ignitions and reducing the boost they've become distinctly uncompetitive, and the Britten-Lloyd Liqui Moby team is also working overtime on engine changes. That, and a general shortage of good sponsorship in this supposed boom-time is hurting the Group C series, in which C2 entries now comfortably outnumber the C1s.