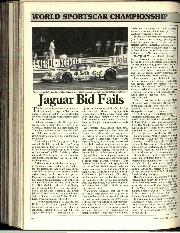 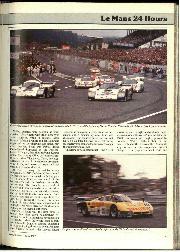 The Porsche factory was down to its last car after an hour of racing at Le Mans but that one, driven by Derek Bell, Hans Stuck and AI Holbert, was enough to write some new pages in the record books.

Bell won the race for the fifth time (now second only to Jacky Ickx's record of six victories), Holbert for the third time, and Stuck for the second time. It was Porsche's twelfth Le Mans success, and the seventh in a row. Could a manufacturer be more dominant than that?

After seeing the Silk Cut Jaguar challenge crumble, Sir John Egan declared "we'll keep coming back until we win", but the bleak fact is that Tom Walkinshaw will have to wring still more out of the XJR-8LM design to beat the works Porsches next year, and even that assumes that the Stuttgart firm doesn't make further progress.

An hour into the race the Porsche camp was in complete disarray, and it seemed unlikely that the Rothmans team would succeed this time. Walkinshaw could not have written the script better, as the works and private Porsches went down like skittles, all victims of fuel-related engine failures. Four of the best had gone, including the works car of Jochen Mass/Bob Wollek, both the Joest Racing entries handled by Sarel van der Merwe/ David Hobbs/Chip Robinson and Frank Jelinski/Hurley Haywood/Stanley Dickens, and the Kremer entry for Volker Weidler/Kris Nissen/Kunimitsu Takahashi.

It was an unequal struggle. Bell, Stuck and Holbert would have to uphold Porsche's honour on their own, with a car of doubtful reliability, against three superb Silk Cut Jaguars which lay first, third and fourth.