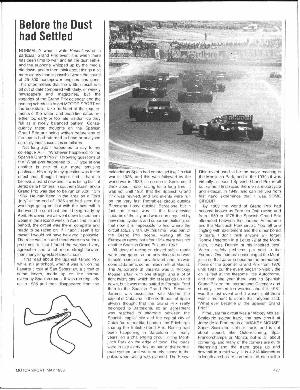 Normally when I write Reflections on a particular Grand Prix event it is when there has been time to wait and let the dust settle, and the euphoria whipped up by the media die down, and to then think about things a bit more clearly than is possible when the sound of 25 800 horsepower engines has gone. This often means that the written result is a bit out of date compared with daily, or weekly newspapers and magazines, but the vagaries of the Grand Prix calendar and the printing schedules to get MOTOR SPORT on the bookstalls, take no heed of the requirements of the writer, and dead-line dates are either too early or too late; seldom do they fall as a nicely balanced pattern. Consequently these thoughts on the Spanish Grand Prix are being written before any of the teams had returned to base or analysed carefully their successes or failures.

Not long ago I happened to say to my colleague A.H., "Whatever happened to the Spanish Grand Prix," Throwing questions of the "What ever happened to . . ." type at one another is one of our more amusing pastimes. His reply to my question was to the effect that, though I might find it hard to believe, a brand new circuit was being built at Jerez de la Frontera in southern Spain, and a Grand Prix was due to be run on April 13th 1986. He had been in the area on a Ford "jolly" at the end of 1985 and had seen the workings going on, but with the best will in the world he could not see it being ready by April. However, we all went down to southern Spain in the second week in April and, lo and behold, the circuit was there, complete and ready to be raced on. If I hadn't seen it for myself I would not have believed it possible. The race was run and there were no serious problems, in fact I found the weekend very agreeable and a lot more straightforward than many long-established circuits.