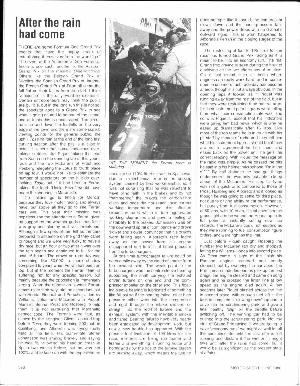 There are some Formula One Grand Prix events that have the happy knack of establishing themselves from the word "go". The event at the Autodromo Dino Ferrari at Imola is one such, another is the Austrian Grand Prix on the majestic Osterreichring. Others like the Belgian Grand Prix at Nivelles, the Spanish Grand Prix at Jarama, the French Grand Prix at Dijon all seem the fall flat on their faces from the start. I think "ambience" is the only word to explain it. Certain entrepreneurs may think the public are gullible, but in the long run this is not so the spectator goes to a Grand Prix to see what is going on and to be part of the scene, and at Imola this is encouraged. The circuit runs up and down the foothills on the very edge of the town and there are some superb viewing points for the general public, the uphill Tosa hairpin at the end of the long fast curving section after the pits is a case in point. It is here that some audacious overtaking is done, like Piquet taking the lead from Senna on the opening lap of this year's race and the two McLarens of Prost and Rosberg relegating the Lotus to fourth place on lap four. I would not like to estimate the number of spectators on the hillside overlooking Tosa, but if it had been a Ferrari taking the lead "Uncle Enzo" would have heard the cheering in Maranello.

The Italians go to Imola (or Monza) because they love motor racing and always have, but above all they go to see Ferrari cars win. This year their mission was hopeless and the attendance suffered, given no support by the weather gods either, for it was grey and gloomy and rain threatened. Although a few spots of rain fell as the cars prepared to assemble on the grid they came to nought and we were very lucky to have a dry race, but an hour or two after it was over the rain began and continued to fall for the next 15 hours! The crowd on race day was something like 80,000. a mere shadow compared to years when Ferrari has been on top, but at the moment the Ferrari team is suffering, not for any specific reason, but mainly because the opposition is immensely strong.