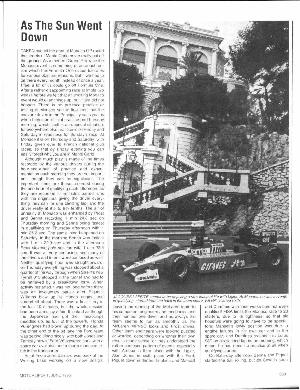 Taken overall the annual Monaco GP round the streets of Monte Carlo never really got off the ground. As a modern Grand Prix race the Monaco event is something of an anachronism which the Formula One circus tolerates for various obscure reasons, but if we had to be there every month instead of once a year, I feel a lot of us could go off Formula One. After a rather disappointing race at Imola two weeks before we felt that an exciting Monaco event would even things up, but it just did not happen. There is no pre-race practice or testing at Monaco so the first time that the cars are driven in the Principality each year is when they start official practice on Thursday morning, which itself is an unusual situation, for everywhere else practice is on Friday and Saturday in readiness for Sunday's race. At Monaco it is on Thursday and Saturday, with Friday given over to French national club races, so that by Friday evening you can easily forget why you are in Monte Carlo.

Although much play is made of the times recorded by the various drivers during the hour-and-a-half of practice and experimentation each morning they are not important, though they can be significant. The important times are those recorded during the one hour of qualifying each afternoon, as they are recorded in no holds barred runs with the engineers giving the driver everything they can for one blinding lap, and the driver really at 9 1/2 to 9 3/4 tenths. The air of unreality at Monaco was enhanced by Prost and Senna recording 1 min 24.8 sec on Thursday morning and Senna being fastest in qualifying on Thursday afternoon with 1 min 25.2 sec. The same thing happened on Saturday, in the morning Senna was fastest with 1 min 22.3 sec and in the afternoon Prost claimed pole position with 1 min 22.6 sec. It was all very confusing, and many of the drivers and teams were confused as well. Neither qualifying hour was straightforward; on Thursday everything was stopped about a quarter of the way through when Streiff's new Tyrrell 015 stopped in the tunnel and had to be retrieved by a breakdown lorry. When activity restarted it was not long before there was an involuntary pause after Piquet's Williams blew up its Honda engine and spread oil about. There was a final flurry in the last 10 minutes, but the whole session had been a messy affair. It looked as though the Japanese had got their microchips muddled up, as four of the powerful Honda V6 engines had blown up during the day. At the other end of the pit lane the Ford team was getting along nicely, with both Jones and Tambay now in Ford V6 powered cars, with a spare car available and a fourth monocoque, tub in the transporter.