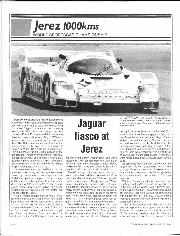 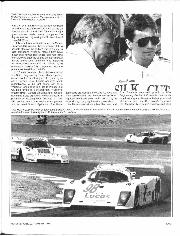 Derek Warwick and Paul Frère have one thing in common: thirty years ago the talented Belgian dashed Jaguar's hopes at Le Mans by spinning his works D-type at the Esses and involving team-mate Jack Fairman, though on that occasion Ecurie Ecosse saved the day for the Coventry marque. At Jerez on August 3 Warwick made a dubious piece of history by having all three Silk Cut Jaguars spinning off at the first corner, opening the way for a deserved 1-2 victory by Walter Brun's Swiss Porsche team. This time there was no Ecurie Ecosse in the background, though Warwick himself was able to keep his Drivers' Championship hopes alive by finishing third and moving 12 points closer to Derek Bell and Hans Stuck, absent through lack of sponsorship for a private entry.

The Spanish round, confirmed late in the day, attracted a poor entry and the organisers were saved by handsome sponsorship from the Gallahers cigarette company, for a meagre 4,500 spectators bought tickets at the subsidised price of 500 pesetas, £2.50.  The superb motor racing facility in the rolling, sun-baked Andalusian countryside deserves better, but one fears for its viability.

A small matter of settlement of heavy 'fines' following the inaugural Grand Prix in April had to be arranged before FISA would grant the permit, and the sixth round of the drivers' championship attracted only nine C1 cars and eight C2 entries: no Rothmans-Porsches, no Lancias, no Lloyd, no Joest, no Kremer. The race would be contested by the Silk Cut Jaguar team, and by two-car entries from Walter Brun and John Fitzpatrick, with backing from the Obermaier Porsche team which included Dudley Wood, and by the Cosmik Racing March-Porsche 84G handled by Costas Los and Tiff Needell.